In addition to the simple scripts from the “Inviting” section and those covered by Todd in The Little Black Book of Scripts, write out your responses to the following three common questions:

“Can you tell me more about it?”

The truth is if you aren’t prepared with a solid response for these questions, you’re still a “newbie” (regardless how long you’ve been in the biz) and any success you experience is probably just pure luck.

Now take your script and your responses and role-play them with a business partner. Practicing several times will help you relax and sound more natural when you go live. You may also want to write down your answers on a stack of 3×5 index cards and have them in front of you for quick access to easy answers.

These cards will go a long way in helping you become a master of handling these questions with ease.

Start your calls by clearing the time. “Am I catching you at a good time?”

If it’s a bad time, tell her that you have a quick question to ask and find out when is a good time to call back. Take control of the conversation and do NOT leave it up to her to call you back because she may forget to d it, or wait several days before getting back to you… or perhaps never pick up the phone to call you again! If you get someone’s voice mail, leave a simple message saying, “Hi, this is _____. Give me a call I have a question I want to ask you.” That’s it and say no more on voice mail.

Keep your calls brief and to the point. Having too much conversation prior to inviting people to an appointment gives them the impression that the business is a minor detail so keep the main thing the main thing. Tell them up front that you only have a couple of minutes to talk. This way they know you’re not calling to shoot the breeze.

Rather than setting up appointments to show the plan, new Team Members tend to make the mistake of explaining the business in casual conversation to see what kind of reaction they get. Instead of diving in, they poke at it with a stick and consequently get poor results.

Remember that the whole purpose of your invitation is

It’s okay to answer one or two questions during your call, but don’t get trapped into explaining the business. The better someone knows you, the more likely she is to press you for answers. Be prepared. In any conversation, the person asking the questions is always in control so answer a question with a question to regain control.

Here are some great questions and phrases that will help you redirect a conversation: 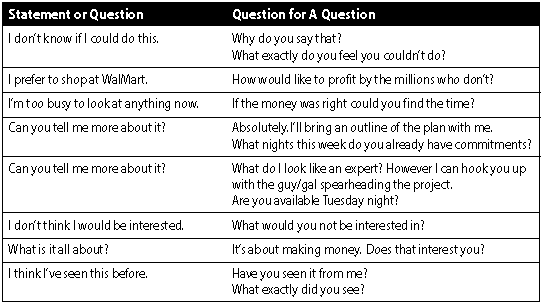 Let’s say you have a friend who has never been to the beach before. He’s never even seen a picture of it, but you know he’s going to love it if you can persuade him to go with you. So you do your best to describe it to him by handing him a glass jar containing a few handfuls of sand and a few cups of salt water you got at the beach. He looks at it, shakes it up a bit, and gives you a look like you’ve completely lost your marbles.

Without a moment’s thought, he hands the jar back to you saying, “No thanks, I don’t think I’d be interested in that.” Why? Because he made a judgment based solely on the contents of the jar. It was a very real piece of the beach. Nevertheless, it was just a piece. Trying to describe this business over the phone is like handing someone a jar with sand and water. They won’t get it, they won’t feel it, and they won’t see it.

When making your calls to invite someone to a meeting, ask,

“What nights do you already have commitments?”

If he’s not available on the dates of your meetings, don’t even get into the script. Tell him, “Sorry. That’s too bad. I’ll give you a call next week, and we’ll see if you can make it another time.”

Leave him curious and he’ll attend your next meeting just to find out what you’re up to. If you’re setting up a one-on-one appointment, go through your script first and then decide on a time to meet.

It’s best to give people choices rather than asking them open-ended questions. If you ask, “Does Tuesday at 8pm work for you?” and he says “No,” then you’re stuck asking about Wednesday, then Thursday, and before you know it you’ve opened  up your whole week for him. Instead, ask, “Which works better for you, Tuesday or Thursday?” This gives him more options and prevents the chase. You can also do the same with the time, “6 o’clock or 8 o’clock?”

Make sure to include the spouse when you invite people to see the plan. If your prospect hesitates to include his spouse, let him know that for the sake of time, you’d prefer to have them both present. He may be the one who makes the decisions, but he’s going to talk it over with her anyway so she might as well be there so they can have an educated discussion about it.

Once you’ve agreed on a definite time and place to meet, it’s important to confirm the appointment with him. You’re double- checking his commitment to attend your meeting. To confirm your appointment, say something like, “Can I mark you down as a definite?” If he’s married, you’ll want to confirm that his spouse will be attending the meeting by asking, “Will your spouse be with you?” When you confirm your appointments, you’ll schedule 4 meetings and show 4 plans rather than having to schedule 10 meetings to show 4 plans.

Here’s a common response you’ll hear when trying to confirm an appointment: “Uh, Wednesday? I think that’ll work. Why don’t you give me a call on Monday just to make sure.” Don’t agree to chase people around. Your time is valuable. Here’s what you can say: “Hey Bob, I’ve got a lot of interviews in my calendar and I can’t work that way. I either put something in my calendar and it’s a done deal, or I don’t. If making money isn’t a priority for you right now, just let me know.”

You’re either going to confirm or confront. You’ll either invest a little extra time and effort to confirm the appointment and lock it in ahead of time, or you’re going to spend a lot of time and effort chasing people down to face an uncomfortable CONFRONTATION after the scheduled meeting dealing with why they didn’t show up. Most people would rather CONFIRM than CONFRONT any day, how about you?

When Carl first got started in the business, he had an initial blast of 40 “NOs.” Trying it his own way, he talked to 40 people and got nowhere. “I could barely get anyone to even look at the plan, let alone get involved. It didn’t take long for my mentor to give me a pink-slip

and tell me that I was fired! He said, ‘Here’s the new plan. You’re now a talent scout for me. I’m looking for a few good people who are interested in earning$2 – $3,000 a month, part-time. Additionally, I’m willing to mentor a few of those people to earn a solid 6-figure income. Now, I want you to go talk to some people and take yourself out of the picture.’”

So he did. People would ask him questions and he would respond by saying, “Do I look like an expert to you? You need to talk to my partner. I’d be willing to put in a good word for you and set up a time when you could meet him.” He started using third-party credibility by thinking of himself as a talent scout instead. Guess what? It’s worked out pretty great!

Take the focus off yourself and onto the credibility of others. Whether you talk about a successful business owner, a senior associate, a good friend, author, or business trend, referring to someone or something other than yourself adds credibility to the business. And taking yourself out of the picture will lend greater credibility to your statements.

Here are some third-party approaches you can try. Let’s say that you’re a receptionist for a dental office and you’d like to prospect a dentist. Instead of trying to convince her about your business credibility, say something like, “I’ve always respected your work ethic and professionalism, would you give me your opinion on a business project I’m working on?”

Or, let’s say you work in a large office and you’d like to talk to the most influential person there. You could say, “There’s a bunch of people in this office that are about to become prosumers. I wanted to talk to you first because I’ve always respected your leadership style and I’d like to give you the opportunity to be team leader.”